Show Us Your Books: My Favorite Reads of 2020

Remember when I used to regularly read? Me too. It was early 2020. The before times when I used to take a train to work every day and NOT spend that time doomscrolling about the weird new virus in Wuhan, China. In the end, I still read 40 books this year. It might end up at 41 if I finish Christina Lauren’s Holidaze, which I should.

In rereading many of my books posts it seems like I spend a lot of time being sheepish about my weak numbers. That ends now.

I don’t rank books one star anymore, because if I dislike something that much I’ll just DNF the book and move on. Many of my books were authored by women and POC. This used to be something I made an effort toward, but its much more natural now.

Onto my favorite books of the year! All of them are five-stars.

Reaper Man by Terry Pratchett – The irony of my bragging about reading more women and POC and my first 5 star book being from a dead, white, Englishman is not lost on me. But this is Terry Pratchett’s Discworld, a series that I am reading through for the first time. And this is the second book about Death, one of my favorite characters. Death is a very no-nonsense character, but is also very kind. In this book, Death finds out that he, himself, is running out of time. This the story of what he does.

Wham! George & Me by Andrew Ridgeley – Hey, a living, white, Englishman! What moved me most of all is that this could have been a trashy tell-all about a man who is no longer around to tell his side of the story by the less-famous half of the pop duo. But instead it’s a compassionate telling of the wild ride that Andrew and George shared. The dedication reads: This memoir is dedicated to the memory of my dearest friend, with whom I did the only thing I ever really wanted to do and was the only person I ever imagined doing it with. Is it the best book out there? Nah. Life-changing? Nope. But I loved it all the same.

Aristotle and Dante Discover the Secrets of the Universe by Benjamin Alire Saenz – You all know by now that I’m not much of a YA reader. The genre tends to overflow with know-it-all teens with unfettered freedoms and hands-off parents. I’m a fan of YA where the parents don’t run the show, but back up the kids. This is the beautiful story of two boys slowly finding themselves. There are jarring, scary moments but everything ends up okay and the dog does not die.

Just Mercy by Bryan Stevenson – My toughest read of 2020 but well worth every agonizing minute. It’s an unflinching look at the disparities in the American “justice” system that results in a deck that’s stacked against Black Americans. It’s rough but well-written and important.

Help is on the Way, Kind of Hindu by Mindy Kaling – Two short essays by Mindy Kaling that were released with four other essays in October. Mindy Kaling is a brilliant, funny, writer and if you’ve read her earlier books you know that. Mindy is over 40 now and like the rest of us privileged enough to make it this far through life, has experienced losses and life changes. These were my two 5-star essays because they successfully wove humor and poignancy.

What were your favorite books of 2020? Also, are you on the Litsy App? I was last year but found it just another thing to keep track of and I’m wondering if I should give it another shot. 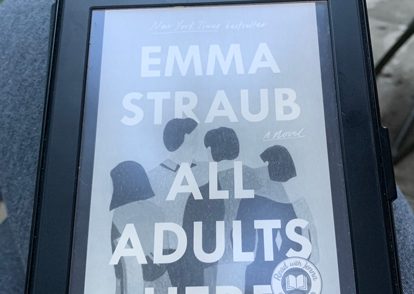 Not That Kind of Girl review

I loved Die Hard, which is not a Christmas Movie