The second Tuesday of the month is a special one in literate blogland – it’s Show Us Your Books day, and it takes me a good week to get through everyone in this linkup. 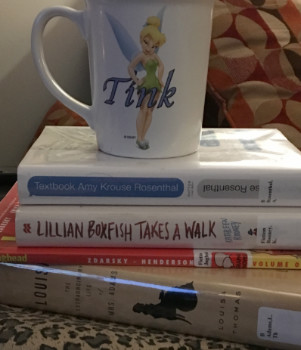 Currently on the endtable. The Jughead comic — I MEAN GRAPHIC NOVEL — was an impulse borrow.

This month I realized that the highlights I put in a Kindle book stay with my Amazon account, even with the ebook goes back to the library. I’ll definitely be using that feature more.

My reading goal this year is 50 books and I’m at 15! Pretty impressive, Kim! Thanks, Kim!

As always, I use the Goodreads scale, which is:


Books for Living — Will Schwalbe

I do like me a book about books. In this one, Schwalbe gives a list of books with valuable advice on living and ties them into various points in his life. Plus, you have to like a guy who believes that “Reading and naps, two of life’s greatest pleasures, go especially well together.” I added plenty of books to my TBR thanks to this one. Three Stars.

Would you belive I’ve never read Macbeth? I so hated the Shakespeare that I was force-fed through school that I never pursued it on my own. Doesn’t matter, because I’ve read Terry Pratchett’s take on it. This is stop 6 on my journey through the Discworld series, which is quickly becoming my favorite series ever. And the witches are BY FAR my favorite characters of that universe. In this one, Magrat (Maiden), Nanny Hogg (Mother), and the amazing Granny Weatherwax (Crone) reluctantly take on an unscrupulous Duke and his manipulative wife who have stolen a kingship. In their corner is the ghost of the dead king and a Fool who is quite smart. Will good prevail? OF COURSE because these stories are balm for the soul.

Favorite line: The Fool jingled miserably across the floor.

It wasn’t until I was 20% in and realizing that ALL of the teens were the smartest and most mature teens on earth that I realized it was YA. I was going to put it down (YA isn’t my thing AT ALL) but decided to finish it out anyway because I had it on hold for so long. And I’m glad I did because it was a good book. The male lead, Henry, is an emo shithead, but matures in the end. The female lead, Rachel, is coming off of a really bad couple of years. I really wanted to know more about Henry’s parents and if they worked it out but alas, it’s YA.

Favorite line: Shit nights roll into shit mornings that roll into shit afternoons and back into shit, starless midnights. Shitness, my sister says, has a momentum that good luck just doesn’t have.

Three reluctant stars, and maybe I can do one YA book a year. 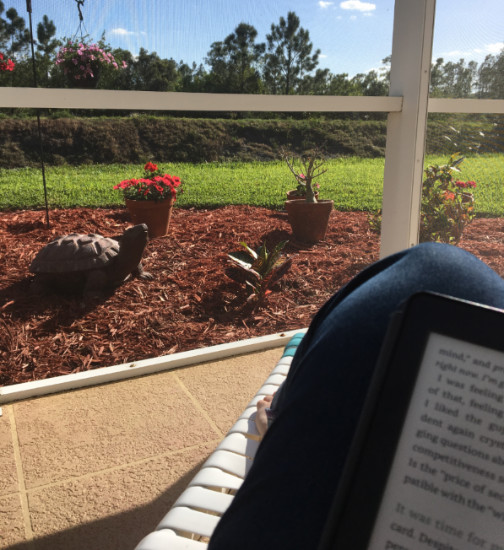 Where I was reading last week.

This was mentioned in Books for Living and I realized I had never read any work of Morrison’s. That ended in February and I picked a hell of an epic story. What makes a family? What’s in the name you are given? What is the measure of success? How far is too far? What does it mean to escape? This is the story of Macon Dead III, aka “Milkman” and his decades-long journey toward truth. I couldn’t put it down, and I lack the words to explain why. Five Stars!

Between the World and Me — Ta-Nehisi Coates

Written as a long letter to his teenage son, Coates covers his life experiences as a Black man growing up in the rough area of Baltimore, and how his life was changed and sharpened by the books he read and the people he met at Howard University. It was an uncomfortable read for me, because of who I am and the privilege I carry. It was also uncomfortable because while I eagerly wanted to read Coates’s words, I realize that he probably wouldn’t even give my words the time of day.

His prose is beautiful; it is lyrical and poetic. However, I’m not the audience for his words. I have quibbles with his arguments, but of course not his experiences. I hope his son has a presence in his life telling him that it’s okay if he wants to have the nice house in the suburbs with a treehouse and a son in Cub Scouts. Three Stars which still means I liked it.

Sunshine is a farmer’s daughter who moved to the big city with her handsome husband and, homesick for the farm, began to cook her childhood favorites on Youtube. She parlayed this into Youtube stardom, a cookbook deal, and a proposal to have a TV show on the Food Network.

Except, she’s not anything that she claims to be. Her secret is exposed and she loses her house, husband, money, prospects — everything. She has no choice but to go back to her actual family in her actual hometown and try to put the pieces back together. The characters were all unlikable but worse, had no depth to them. There’s a “babies/children fix everything!” theme that’s never my thing. I HAAAAAAAAATED the ending. HAAAAAAATED it. There were levels of UGH that ruined what started out as a one-day beach read.

A line from the protagonist: …the way Jersey actually looked pretty from across the river. Oh piss off, Sunshine. Two stars.

If you do a web search for ABC News correspondent Harris, the first video that comes up is of his panic attack on live TV. That’s grossly unfair and makes me thrilled I’m not famous. This book is a byproduct of the years of therapy Harris went through to try and become a calmer, happier person. Not always easy when you’re on network news and 90% of your job is jockeying for stories. He lands on meditation as an effective took. I used to be a big self-help book junkie (ask me about my SARK phase*) and I welcomed Harris’s snarky, self-deprecating, and self-aware take on everything he was trying. At least he’s aware of what a d-bag he comes off as at times.

Eating mindfully, I actually put the fork down between bites rather than hunting around the plate still swallowing. As a result, I stop eating when I’m full, as opposed to stuffing my face until I’m nearly sick, as I usually do.

Three Stars and I downloaded a meditation app. Whether I use it is another story.

Currently reading: Louisa: The Extraordinary Life of Mrs. Adams, which is more interesting than I thought.

*I was going to link to SARK’s website, but right now the front page is a giant banner featuring Maya Angelou’s giant portrait and a giant quote from her about how SARK is needed in this world. My eyes rolled so far back that I’m staring at my brain. SARK also bills herself “A Beacon of Hope in a Chaotic World.”