Life is slipping through my fingers so quickly lately — like I’m trying to hold onto sand. I go to work, I go home, I’m doing things, but by the time I get to the point of the day that I’d blog, I have dogs on my lap or the Surface has no charge or I’m writing Postcards to Voters and … meh. It is what it is. 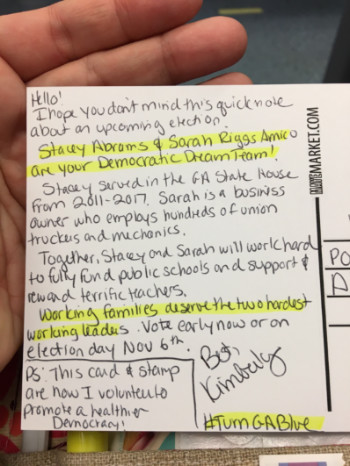 I have no pics of me reading so here is some of my writing.

With that, let’s commence the 87th jump-start of this blog with this month’s book report, aka Show Us Your Books!

Guards! Guards! (Discworld, #8) — Terry Pratchett
You know, you read one of my Discworld reviews, you’ve read them all. This series is like a warm blanket and a bowl of Froot Loops. I laughed a lot, I cried a little. Give me a story where unlikely goofballs become heroes, love blossoms in unexpected places, and good triumphs over evil and I’ll fall for it hook, line, and sinker.

Four stars and the dragons live.

The Greatest Love Story Ever Told: An Oral History — Megan Mullaly and Nick Offerman
Mullaly and Offerman are the richer, more talented, and raunchier version of WM and me. I love everything they do and fully expected to toss five stars at this book. I’m going to preface this by saying that I am a flawed person who has never written a published book. But I don’t think recording yourselves chatting about any topic and getting it published is the same as writing a book. It was perfectly fine, and parts were funny and parts were interesting. But it’s not even like they each take a chapter. It’s a literal dialogue, with each paragraph prefaced by M: or N: depending on who is talking.

Three stars. Get the audio book instead. I’m sure it’s better that way.

From the Corner of the Oval — Beck Dorey-Stein
It’s another Obama staffer memoir, a coming-of-age (albeit in one’s late 20s) story with a huge side helping of Hope. Beck Dorey-Stein was in DC with no full-time job prospects (but multiple crappy PT jobs) when she answered an ad that turned out to be a job as a stenographer in Barack Obama’s administration. Soon she’s in “The Bubble” — keeping crazy hours, traveling around the world, making better money, etc. But she’s also trying to find herself and what she’s supposed to do with her post-Obama career amidst a chain of questionable relationship decisions. It was funny and gossipy enough that WM was reading over my shoulder on the plane ride back from Disney.

Three stars and I wonder how many condoms the staff used during the 8-year administration….

Promise Me, Dad: A Year of Hope, Hardship, and Purpose — Joe Biden
You’ve heard of Joe Biden, lifelong politician and former Veep. You know of his tragic early adulthood, of his wife and 3 little kids being in a car accident, and only his 2 sons surviving. This is his telling of the time when his son, Beau, was living with and dying from brain cancer. Biden was VP, with several important foreign policy crises happening, AND a 2016 presidential bid to consider. We know how it all ended. This story tells you why.

Three stars. Biden wants us to know that he would have been a great President and likely would have won, if he had chosen to run.

White Houses — Amy Bloom
I’m a very big Eleanor Roosevelt fan, and so I was troubled about whether I should check out this book — a fictionalization of her love affair with Lorena “Hick” Hickok. Would it be disrespectful? Or sleazy Eleanor slash fic? But EVERYONE in this book is dead now, so I took the plunge. It’s a lovely and bittersweet, slow moving story of adult forbidden love. Franklin Roosevelt is dead, the funeral is over, and Eleanor and Hick are spending the weekend at a cottage, going through sacks of condolence letters. The story is told by Hick, and the letters remind her of times in her life before Eleanor, and her life with Eleanor.

Hick’s childhood is triggery as all get-out, with abuse and incest/rape and yeesh. But it provides a very good foil for what Eleanor considers to be hard.

Currently reading: You Are a Badass: How to Stop Doubting Your Greatness and Start Living an Awesome Life. Which I might abandon because I’m not feeling self-helpy right now.

Book reading is slowing down a bit, because I get queasy reading on the train when it’s dark. It only happens this time of year, since the light starts coming back by January.

Show Us Your Books: September 2021

Ollie and Murphy: a quiet moment