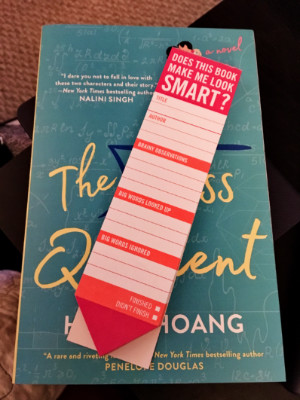 My goal is to read 50 books this year. I’m at 40. I’ll be glad once I hit 50 because maybe then I’ll pick up some longer books. This month I made a conscious decision to stick with happier books, because some of the ones I read this year were emotional doozies (I’m looking at you, Idaho), and I need a bit of light for a while. To that end, I cancelled my hold on “Just Mercy” by Bryan Stevenson when it came up. I’ll get to it this year, but I can’t do a death penalty/unjust incarceration book right now. I don’t want to be known as the woman who cries on the PATCO line every day.

I use the Goodreads system to rate books, which is:

Beautifully written and incredibly funny, Eleanor Oliphant Is Completely Fine is about the importance of friendship and human connection. I fell in love with Eleanor, an eccentric and regimented loner whose life beautifully unfolds after a chance encounter with a stranger; I think you will fall in love, too!” —Reese Witherspoon

What Reese doesn’t tell you is that you have to work through a lot of bad shit before you get to the “beautifully unfolding life” part. Eleanor had a childhood full of trauma and awfulness. But now she’s an adult and she’s fine. She has a job, an apartment, a routine. And that’s all someone needs, right?

Four stars, because things eventually beautifully unfold for Eleanor. She has a lot to straighten out first, though. Huge-ass triggers for child abuse, domestic abuse, and an “offscreen” suicide attempt. Triggers the size of tractor-trailers. And lots of cringe-worthy awkward social moments.

Alexa and Drew are on an elevator in a San Francisco hotel when the car gets stuck. Thankfully, they’re not stuck for the entire book, just long enough for sparks to fly. Drew needs a plus-one for a wedding he’s in town for, and he impulsively asks Alexa. She says yes, and pretends to be his new girlfriend for the rehearsal dinner and the wedding.

Alexa is black, and is the chief of staff for the mayor of Berkeley. Drew is white, and is a pediatric surgeon in LA. Can they make it work? To do that, they have to deal with a long distance relationship, their two very demanding jobs, and racism and privilege.

Five stars for a fresh, modern, HOT romance that made me smile!

Janey Sweet is the CEO of a wedding dress design house. She’s also overweight, or so we’re told. There is never a weight assigned to her. Her business partner Beau puts her on leave until she loses weight so she can not be seen as an embarrassment to the brand, which specializes in dresses for tiny women. Mmmmm. Okay. So Janey goes on a quest to lose weight with the help of her best friend CJ and some truly wacky people she meets along the way.

Here is my beef. Janey immediately jumps into the weirdest, most extreme exercise classes I have ever heard of. And she complains about being tired, but … she shouldn’t even be finishing these classes. She’s doing spin and climbing ropes and this is not entry-level, fat-girl, gets-winded-while-walking fitness. The plot about the company gets lost amidst the (completely over-the-top) drama with the fitness gurus.

If you can imagine a rednecky romance book with educated characters and men-who-know-boundaries, this would be it. Our heroine, Jessica, is a math teacher who returned to her home of Green Valley, Tennessee to pay off her student loans. Once that’s done, she is OUT OF THERE, because she wants adventure in the great wide somewhere. She wants it more than she can tell. But she hooked up with our beefcake, Duane. He’s one of six bearded brothers with a no-good biker daddy and a dead librarian momma, and thus this book is first in a series. The plot points are eyerollingly nonsensical. I still don’t understand how one of them wrapped up, but the dialogue was good and the action was steamy and it’ll do to raise the spirits

Three stars, have moved on to the second book. I probably won’t make it through all six.

Young Jane Young — Gabrielle Zevin
Aviva Grossman is a college student interning in the office of the congressman from her hometown. She’s smitten by his charm and power. He initiates a relationship. She accepts and writes an anonymous blog. Oh, Aviva. Things blow up. The congressman recovers from it just fine thankyouverymuch. Aviva becomes a punchline, is unable to find a job after graduation, and her life seems to be in tatters.

This book is narrated by its women characters and I appreciated the differing points of view because each one filled in blanks in the others’ stories.

Four stars, because I do love a redemption story. By the way, you should follow Monica Lewinsky on Twitter. She’s doing just fine.

Currently reading: Beard Science, Winston Brothers Book 2, which was only $5.99 on the Amazon Kindle store.