I feel the need to keep writing about Ollie to record and remember what an amazing dog he was.

When we first got Ollie, we lived in the Dee-Luxe apartment in the sky which was on the 8th floor. WM and I (mostly WM) managed to housebreak Ollie while living in an 8th floor apartment. Like many puppies, he would pee when he became very excited. When it was time to take him out, we’d put on his leash and collar, wrap a towel around him, and carry him along with a spray bottle of floor cleaner, a roll of paper towel, and poop bags. If luck was on our side, we’d have the elevator to ourselves. If not, we’d plead with people to not talk to Ollie. If they did, there would be awkward apologizing as we wiped up the elevator floor.

Ollie loved tennis balls more than everything and could smell one anywhere. His nose was never wrong. For example, sometimes he would would stare and stare at the bed. We’d look underneath it and there’d be no ball. But he would still stand there, staring. We’d tell him again the ball wasn’t there. He’d stand there. And then the ball would end up being behind a sock or beneath the corner of the quilt. He would sniff out tennis balls in the laundry basket, in boxes, deep in closets. It was uncanny.

Ollie had been unwell for years. Shortly after Max passed, Ollie developed a very bad ear infection that caused nerve damage on one side of his face. He lost sight in one eye and hearing in one ear. That side of his face drooped. And from there on out, although he was still a happy doofus, he became a sedentary dog.

He snored like a freight train. He burped more than I’ve ever had a dog burp. He could tell time as well as the US Naval Observatory. He had the most serious face while pooping. He loved to chase squirrels. He couldn’t see well, but he’d still stand at the little window by the door and wait for me when it was time for me to come home from work. After Max passed, Ollie stepped in and became my dog, to the point where he’d sit with me whenever I used the bathroom. He would curl up under and on the legs of my office chair, which used to bother me because I’d be afraid that I’d accidentally roll the chair on him. Now I can push my chair back without looking behind me and I hate it so much. He cuddled with me on the sofa every night until about 3 weeks before he died. That’s when we bought him the pricey orthopedic-cooling-gel dog bed that he mostly refused to use. Now it’s Murphy’s.

It’ll be four weeks without him tomorrow. Although the world fell apart in 2020 I am so stinking thankful that I got to spend the last 17 months home with him. 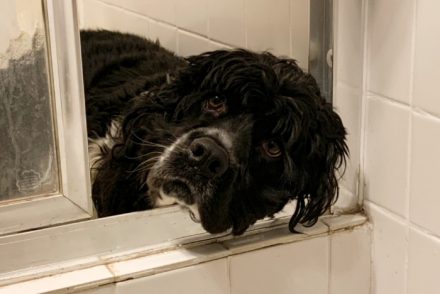