Max is doing surprisingly well. I say this because just a week ago, we were having the “Quality of Life” discussion, as barely moved for three days and we were carrying him outside to do his business. This post was sitting in my drafts folder and was very different. Last Monday was my brother’s birthday and we were gutted at dinner because the only thing in Max’s “W” column was that he was still eating.

And then on Tuesday the ears pricked up and the tail started wagging again. He accepted his harness and started sniffing everything like it’s brand new. This morning he happily pranced across the street with us for his morning walk. I don’t know what happened, but the only thing I can guess is that he’s adapting to his new reality. The fancy expensive grain-free food isn’t beloved (although Ollie hasn’t puked since we started it) so to get him to eat it all we’re cutting the old Purina Savor food into it. Yes, we are buying two different dog foods to make this work. No, I don’t care.

In the face of this changing landscape, an unlikely pack alpha has emerged. Now, this wasn’t always the plan. The “alpha” line of succession went as such…

1) Max
2) Charlie
3) Remy, the tiny mouse that occasionally skittered through the kitchen
4) Ollie

But things being as they are (and Remy having mysteriously vanished), it’s Ollie now. 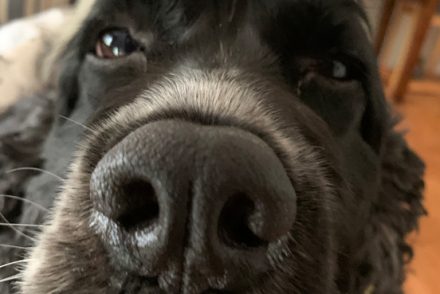