Catching up (warning: long!)
I could lie to you and say I didn’t blog for a week out of respect for President Reagan, but that’d be a big fat lie. Being that I prefer small white lies instead, I’ll tell the truth. This week has been punctuated by extreme periods of business. The non-busy moments were pure laziness. Let’s catch you up,.

Last Saturday, I went to the Riversharks game with Thor, John, Erin, and Erin’s sister. Through the pouring rain, we watched Smarty Jones lose the Triple Crown. Then the game was officially called due to rain. You’ll recall that I was on my way to my first big yearly meeting in Atlantic City. You’ll also recall that I was out of my MIND with worry. That I had nothing. Monday night, I travelled there and checked into my room at the Borgata. Thirty-fifth floor, baby! I gambled, yes. On Monday, I played my usual mix of slots and roulette. And lost horribly. Maybe it was my worry. But I didn’t win a dime. None of my numbers hit and when I retired to my room, I had lost most of my weekend’s allotment. Yeesh

At the meeting on Tuesday I was the fourth to present, and throughout the day my mood went from:

And it was in that violently apathetic mood that I passed out my handouts of ideas and hit the stage. I figured, “You know what? I worked my BUTT off on these little ideas. You don’t like ’em? SCREW YOU!”

They liked them. My boss (who is the big head honcho of the paper) told me I did well. After that, I felt like an American Idol. We had dinner that night, saw a comedy show, and gambled again. This time, my beloved 23 came out more than once, and I started making progress. A bunch of us got a table and played Let it Ride. I lost money, but it was at a leisurely pace. Then I won $300 at a slot machine, and ended up only $20 from where I started.

Know when to fold’em, kids. On the way home Wednesday afternoon, I stopped at a Farmer’s Market and bought flowers to beautify my front lawn. We have lots of shrubs, but no flowers. I bought mainly petunias because you can be a gardening halfwit and they’ll still grow. Pink and purple, because I’m a girl and flowers are meant to be girly. Plus a garden size American Flag for the summer. Call me crazy, but it feels good to see the stars and stripes in my garden. I adore the flag’s pattern. I have a navy dress with red and white stripes and white stars around the trim. You should see some of my — um — let’s end this paragraph right here. 😉 That’s Max, who watched for a brief time as I planted my flowers Wednesday afternoon. I had his leash tied to the porch post. In moments, he managed to figure-eight around the porch post and the flower urn behind it. Then, without any slack left in the leash, he almost leapt off of the porch, hanging himself. Max went inside before he could attempt suicide again. That Max…

Yesterday was the Courier-Post’s Classic Car show. I volunteered to work, and although I had to be at the site at 7:30am, I had loads of fun. My first ‘job’ was to hand out C-P bags (with the paper and other coupons inside) to all of the registrants. I’m not into cars at all but it’s cool to see the old cars, and the levels of care that go into them. My buddy from Accounting and I managed to get the fire engines and cop car to ring their bells and sirens for us. Yes, we shimmied.

Later on, I was bored, so I loaded up a handtruck with some boxes of bags and hawked them, news-girl style, up and down the lines of displayed cars.

I’m guessing I gave away about 75 more papers. What was in it for me? A free hat (I’m all about the hats), some sunburn, aching feet and an impromptu jitterbug with an elderly man. I’m starting to love my job again.

Holy crud! That’s Charlie sitting in the hallway, as captured by my webcam. He’s finally becoming more comfortable with the new house it seems. Only took him a month. (rolls eyes) Both cats are thinner now. For Misty, I attribute that to the 3 stories of house that she’s been exploring. As for Charlie, living a life of constant panic and nervousness can take its toll on even the chunkiest of cats.

That’s it for me. I think I’m going to give Max a trim and bath. He reeks.

Pleased and Bummed: the Lady in Winter 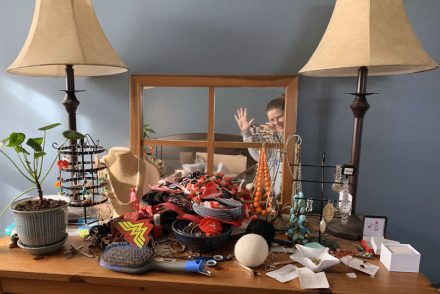