Happy Sunday! To wind up “Operation Use a Bunch of my PTO this Summer” I don’t go back until work until Thursday.

I actually went OUT Friday night. Out. Past 11. I went to Atlantic City with Mom and my sibling who doesn’t read this blog and we had a great time. 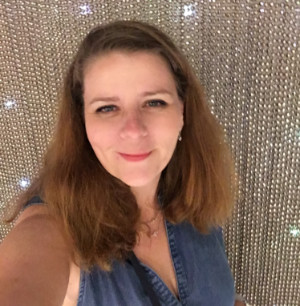 Thinking I look all trendy but actually looking tired.

It was just like the old days, and even though a taking a family trip to AC to gamble sounds dysfunctional, well, we grew up okay. Some families go to singalongs or campouts. (Or campouts where they all sang.) Mine took me to play craps.

Fact: I love playing craps. Last night, after I dropped my 4 $20s on the table to buy in, a man dropped TWENTY ONE-HUNDRED-DOLLAR-BILLS on the table.

And on my roll I threw a five (point), a six, an ten and then a seven.

LEARN CRAPS WITH KIM: You have to put in the minimum bet to play. On a person’s first throw of the dice, if they throw a 2, 3, or 12, that’s craps and everyone loses that come-out bet. If they throw a 7 or 11 and you’re not playing asshole bets (long story), you win. Any other number they throw becomes the point, and your goal (if you’re not playing the asshole way) is for them to roll that number again before they throw a seven. Seven ends the game. You can also bet money on other numbers that you want them to hit before they throw a seven. You can also bet on different ways to hit a number, like rolling two fours to make an 8. I’ve found plenty of ways to lose money at the craps table. I’m good at it!

While I lost $30, he lost about $400 so I guess you can count that as me striking out mightily against the rich. While really being jealous because I’d love to dress up like Janet Snakehole and toss 2K on a craps table.

Yesterday WM and I were determined to earn the Apple Fitness National Parks Challenge Badge, which required a 50 minute workout. We went to the mall (air conditioned, flat, smells like Cinnabon) and walked three miles. And then we came home and walked the dogs. I was destroyed by the end of the day. But we earned this: 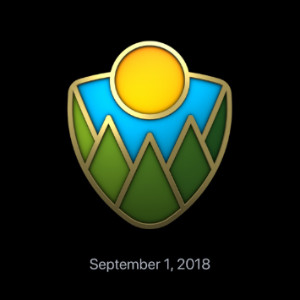 Yes, it’s not really a badge, but a picture of a badge. Don’t care.

Apple would make a killing if they could sell these badges as pins.
***

Time for the Friday 5. This week’s theme is Just Wing It. Let’s get to it!

1. What’s something for which you are waiting your tern?
I keep telling WM that I want to get a summer off from work one year while he goes to work, but I don’t think that’s ever going to happen. Still, a woman can dream.

2. What have you lately gone cuckoo for?
This year I fell in love with my humble herb garden. I’m going to try to extend it into fall/winter with beets, lettuce, and garlic.

3. What’s got you feeling down?
End of summer blues. But this year I’m going to try and make this fall better, or at least not hate fall as much.

4. What’s something you acquired that was unexpectedly cheep?
Nothing. Everything we get is unexpectedly expensive. (expenguinsive?)

5. What’s that fowl smell?
Likely one of the dogs. Sorry.

***
Today I’m hitting up the Americans of Conscience Checklist, drying out the parsley from my raised garden (getting ready to plant lettuce), sitting out with books, and maybe dorking with the sewing machine.

And fitting in a workout, because the Fitness App says I have a 13-day streak going and I hate to lose.

From McSweeney’s: Although He Has Made Zero Effort to Make Amends, It Is Time to Bring Steve the Masturbator Back to Our Office

Friday 5: Touched by your presents, dear