Since our departure time was slated for 9:10am, I set my alarm for 7. We were awake before that though, because at 2am I realized I packed my keys into the big suitcase that I left out last night and what if the bag doesn’t make it to Philadelphia and my keys aren’t there and how will I get home and I don’t want to call my husband and say the keys are lost and .. and … and… That kind of put a damper on my sleep quality for the rest of the night. At 6:30 Mom and I sat in the dark in our cabin as we glided by Miami’s pink and blue lights and docked for the last time of our cruise. SIGH. 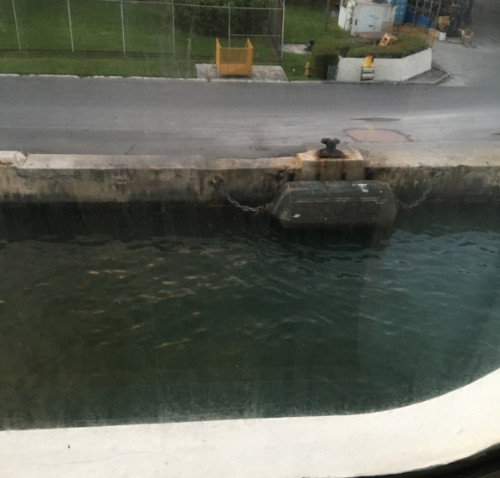 Welcome back to Miami. Here’s your view now. Get out.

Mom went up to the Windjammer to get a table (good plan, it was crowded) and I went to pick up my photo DVD and get boarding passes printed out.

When I got up to the Windjammer it was bedlam. As God is my witness it was like nobody was going to EVER eat again. People were running and grabbing and stacking plates high with food. It’s a freaking hashbrown, people – they sell them at McDonald’s. Get a grip. Of course with all of the chaos, people were spilling things left and right and the floor was dive-bar-level sticky. Mom had her usual gluten-free grub. Two truths and a lie: To fit in I had 3 pieces of that sweet bread, 5 pieces of chocolate covered banana and did a keg stand at the orange juice dispenser. 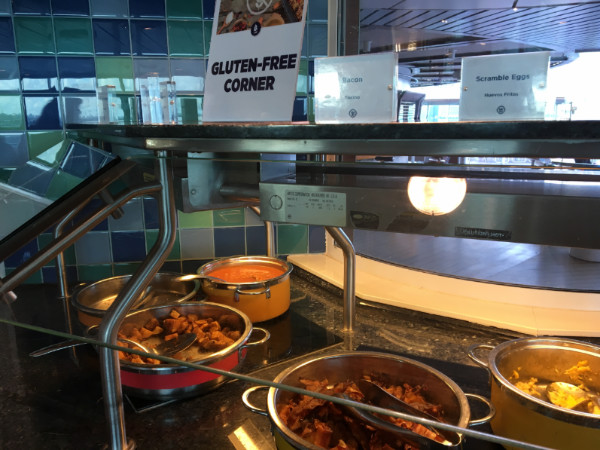 This one’s for you, Mom.

After that we walked the pool deck one last time. We went to the Spotlight Lounge at 9:00 and at 9:10 we were processed off of the ship and into the terminal. Something happened with Customs and we waited an extra 30 minutes before being able to get downstairs to the baggage carousels. I found the bags without a problem, and we got into the other line to be cleared by the Customs agent. Which made us late for the shuttle from the port to Ft. Lauderdale airport, but gave me time to feel through my bag and find my keys. All of the fruit that people collected during the morning’s breakfastpocolypse ended up abandoned.

The ground transportation area of the terminal was loud and crowded and chaotic. We ended up on the 10:30 Miami Port Express shuttle. Major props to them, because they kept in touch with me though all the delays. The FLL -> MCO -> PHL flights went without a hitch, and on the flight I typed out Day 4’s blog post and scrolled through pictures. Sadly. Wistfully.

Got back to PHL, found our bags, shoved onto the Economy Parking shuttle, got to the car (oh crap I only have 1/8 tank gas left thanks Past Kim for leaving me this mess), stopped at the nearest gas station (Wawa, and this Jersey girl DOES pump gas when she has to), headed back to Jersey, dropped off Mom, went home. Reunited with husband, hopped on the sofa with my two snorfly spaniels, fell asleep.

Day 5: B-. Points off for being told we had to get off of the ship.