Day 4: I woke up on my own at 7am, which is good because we had to clear immigration at 9:30. It would have been 11:15 based on our muster station, but since we had an 11am excursion, we got to leave earlier. We got dressed and headed to our beloved windjammer for breakfast. Mom got her usual gluten free grub, I got “fruit” (chocolate covered bananas), some sweet bread with berries in it and sugar on top, a grilled tomato (good and I think something I can do at home), carved ham (apologies to yesterday’s pig) and coffee. And mimosas, of course. After that we took our second cups of coffee to the pool area to watch us dock at Key West. 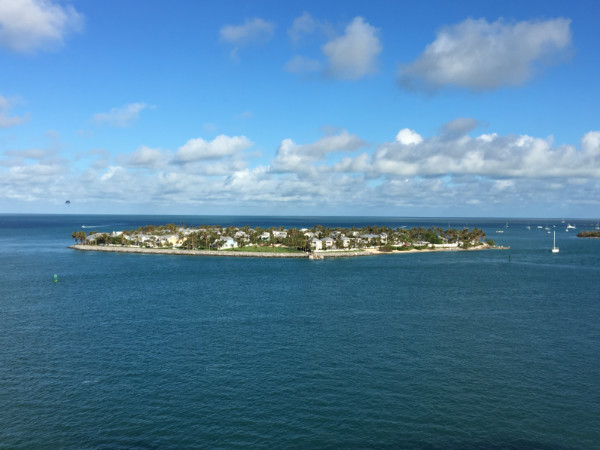 Sunset Key at Key West. I can’t afford to stay there.

We went to MDR at 9:30, and were trooped up the stairs, across the ship to the theater, and down those stairs. Our group was puzzled, but compliant. The very nice agent looked at our documents and cleared us to leave the ship. (background music: Neil Diamond’s “America”)

I chose the Conch Train Tour for our excursion because it was hop-on, hop-off and that was an easy way to get Mom around town. Plus, it looks like a cute little train! What I didn’t realize (I probably should have researched it more instead of gazing lovingly at port webcams) was that there is a 50 minute tour ride between Stop A and Stop B, AND that Stop B was only a few blocks away from Stop A. We were driven right by the Southernmost point buoy without the opportunity to hop off. 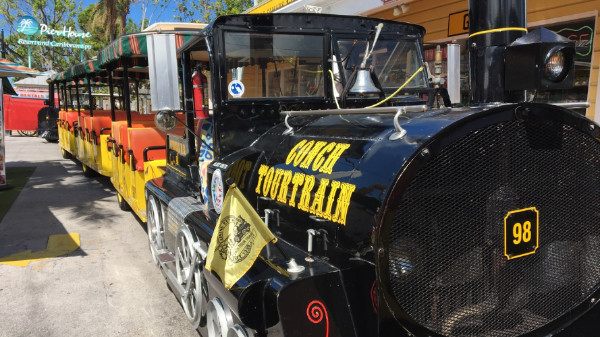 We hopped off at B and decided to walk down Duval Street in the 85+ degree weather to the Southernmost point buoy and then walk back to Train stop C to continue on. YES my mother is still walking slowly with a cane, NO I didn’t think this out, and YES I stink at map skills. 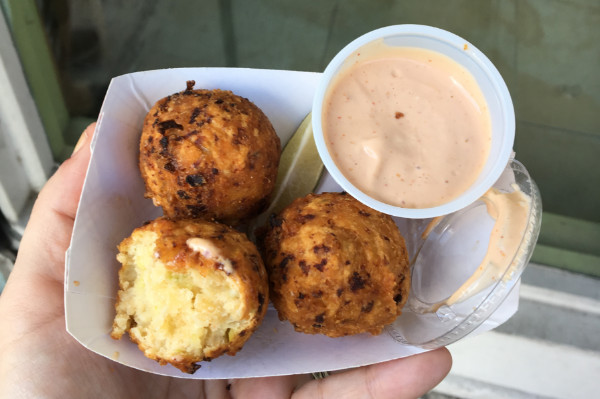 My first stop was at a shack that claimed to have Best Conch Fritters. I had a 3-piece and I can verify that they are the best conch fritters I ever had. We meandered down Duval Street into and out of shops. Sloppy Joe’s was full, so I mugged at the Duval Street webcam instead. My productivity is going to improve 100% once I get back to work because my second monitor will no longer have 5 webcam feeds running on it all day long. We saw the oldest (still-standing) house in Key West. I squeed at the Margaritaville restaurant but we didn’t eat there because I was full of chocolate covered bananas and conch fritters. Instead, I bought a shirt with a parrot and “it’s 5:00 somewhere – Key West” on it because I excel at being a tourist. After about an hour of walking, I brought up Google Maps and had my expectations reset as to how quickly we’d get to the buoy. It was literally closer to go back to Stop B and ride down to Stop C. We turned around and walked back, hopped back on the train and rode to Stop C at Truman and Duval Streets, which was still a good 5 blocks away from the buoy. GOTTA GET THAT PICTURE! 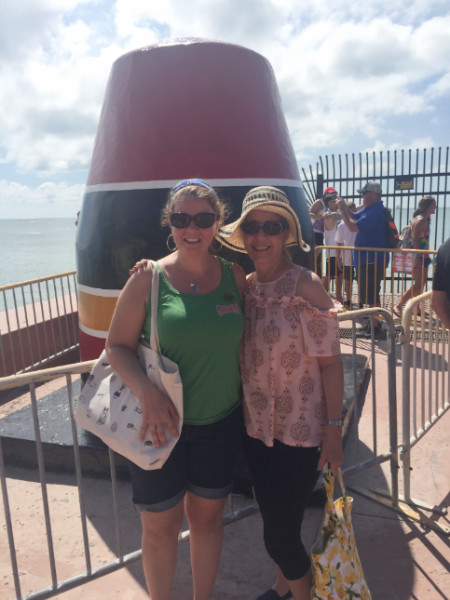 Wouldn’t you know, that the buoy was repainted yesterday (Wednesday) because of the damage it sustained from Hurricane Irma? The colors are painted onto it but the words haven’t been redone yet. So we had our picture taken in front of the plain buoy. I smiled for the webcam and considered the walk back to Truman/Duval. And then we saw him. Like an angel sent from above to save my mother from her daughter’s bad decisions…a young man with a pedicab. It was very hot, and I ran out of my liter bottle of water. 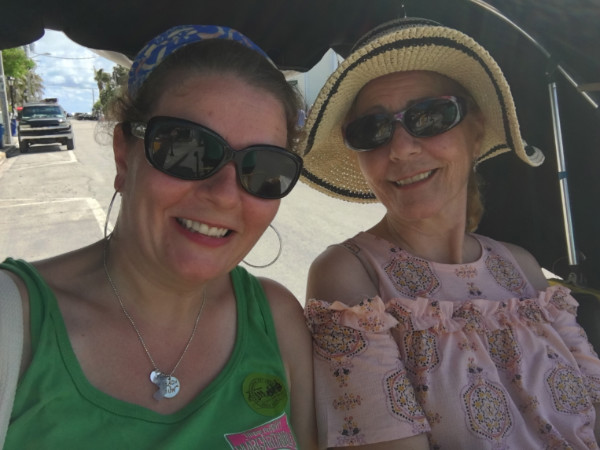 In the sweet shade of the pedicab.

He took us back to Mallory Square and it was a gorgeous, breezy ride. Just amazing. We tipped him well. We bought touristy things at the open-air shops (more non-magnet souvenirs for the nephew and a wooden Key West sign for me, and I don’t know where I’m going to put this thing) there and called our trip to Key West good. I didn’t have an alcoholic beverage or a slice of pie, but I loved the artsy, beachy, slightly drunken vibe there. I’d like to spend 3-4 days there in the future, drinking at sticky bars and listening to music. I’d have rather been docked at Key West until midnight instead of Nassau.

If I had to do it again (I hope I get the chance to do this again!) I would take the Trolley tour instead of the Conch Train because the trolley tour had more stops around town. 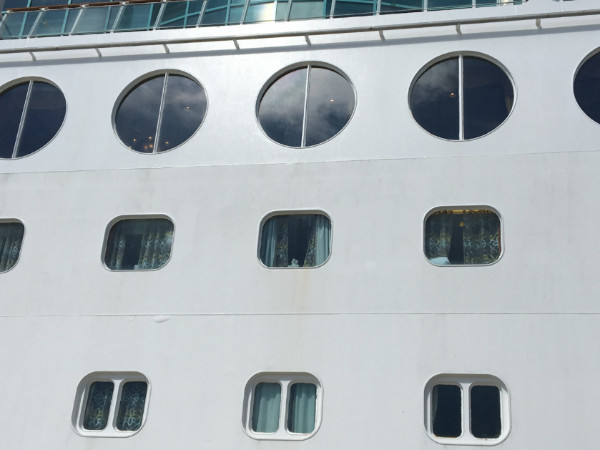 You can see Olliebear waiting for us in the middle window.

My clothes were stuck to me, so I tossed on the sundress I wore on the first day because it’s the coolest non-swimsuit item I brought. We missed Windjammer lunch but Windjammer afternoon snack time is just about the same thing. I had a hot dog and a fruit crumble drowned in chocolate sauce and then we returned to our solarium lounge chairs. I wonder how much it would cost to renovate my living room into a mini Solarium? 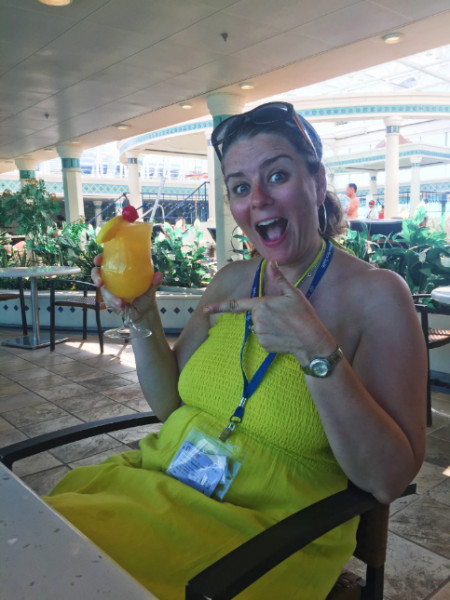 We went to the photo shop to make our tough decisions about photos. It wasn’t open yet so genius me used the kiosk. I ordered the digital 4-photo package, put in my stateroom, prepared to slice 20 photos down to 4 and … it thanked me for my order. Uh. When do I choose the photos? I guess I’ll find out after dinner.

Bingo was starting up it the Centrum. I smugly prepared to walk by until my Bingo Boo JP announced that the jackpot was $300 and it was only a $25 package instead of $33. Grrrrrrrrrrrrr. We bought 2 packages, got the third one for free, and lost AGAIN. Bingo is gambling. Don’t be like me. By then it was 5:45. Mom went to get a sweater and I watched us pull away from Key West. Sadly. Wistfully. Lip-quiveringly.

Our tablemates didn’t come to MDR that night, so again we had the table to ourselves. I had French Onion soup which was oh my goodness so good. I could have had 3 more bowls and skipped everything else. Instead I had a turkey dinner and carrot cake. Mom had shrimp cocktail, Angus beef sliders without the buns, and a gluten free sugar free chocolate cappuccino mousse. Ajay and Jesus (assistant waiter) wished us well and said they’d miss us. We were THIS CLOSE to breaking down into ugly cries but pulled it together.

After dinner we went back to the cabin to pack. Sadly. Wistfully. We were almost done when I saw that it was 8pm. Parade of Flags! We need to see this! We dropped everything and fled back to the Centrum.

I thought this would be the hokiest event EVER. It really looked like it would be. I rolled my eyes as my GenX people do. Whatever. Let’s watch this. You know what’s coming, right? Because you’ve all seen this before.

It. Was. So. Fun. We really enjoyed the dancing interludes and the love and pride the crew has for the countries they are from. (USA’s dance was to Cotton Eyed Joe which, okay fine.) When the Cruise Director Michelle said if the over 800 crew members from over 50-some countries can work together and be a family, so could we all, I got a little choked up. Let’s all be nice to each other. We all want food, love, warmth – that should be more than enough to overlook whether or not I voted for that candidate or that the lady over there wears a headscarf or that other weird person thinks chocolate covered bananas are awful. I’m glad we took the time to see it and still feel guilty for mocking it prematurely. 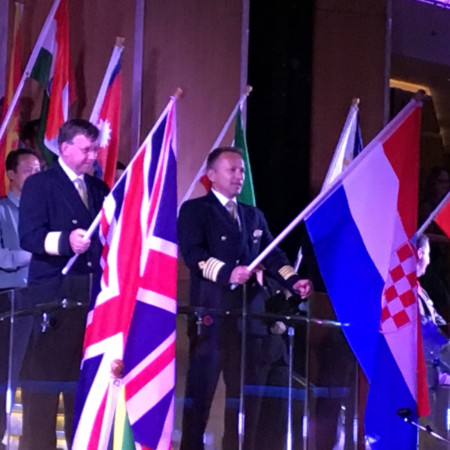 Captain Toni is from Croatia.

We finished packing, put the bags out, and went back to the photo store. Turns out that the digital package is a computer program that allows me to pick 4 photos to download once I go home. Perfect. The best hard decision is a postponed one. After that good news we went to the Spotlight Lounge to watch another round of karaoke. I collected my final drink of the day, the Citrus Cooler. We had 14 fantastic performances and one guy who drank too much and wanted attention. I will listen to people sing off key all night as long as they’re trying in earnest. But when Drunky McLookAtMe tries to be cute, I’m done. On the positive side, there was a young German couple who sang “Stumbling In” (“Our love is alive, and so we begin…”) perfectly and got a standing ovation. When we went back to our cabin, they were rebroadcasting the Parade of Flags on the RCI channel so we watched it again. Mom told me this was the best vacation she ever had and thanked me for planning it and I cried because I’m a giant baby.

It was a great end to a long day and a beautiful cruise.