Ollie has had a rough time of it. He keenly felt Max’s loss, and for a few months he was just … sad. Then he had 2 bad ear infections about 6 weeks apart. Ear infections are common with spaniels like him, but this seemed too much. Back in February, his ears were getting gross again. I did some research on the internet and the resident hippies suggested changing his food to grain-free food. 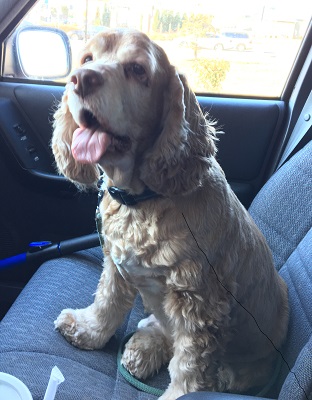 And then I remembered…they were on grain-free food, and after Max passed we decided to switch Ollie to Purina “Bright Mind.” Well crap. We slowly switched him to Blue Wilderness Natural SuperExpensive Turkey and Potato formula, and in a week, the ears became less gunky and less funky!

Yes, Ollie now has Thanksgiving dinner twice a day, every day, and we’re okay with that.

I took him to the vet last week for his rabies shot (he’ll be 10 in June…shots last 3 years…will this be his last–STOP THINKING ABOUT THIS KIM) and the doctor immediately swooped in on his face. I don’t know how you can look at a dog every day all day long and not realize something is wrong, but something is wrong. The ear infections caused nerve damage called Horner’s Syndrome and now one side of Ollie’s face droops. Now we have a prescription ear wash to be administered 1x/week, and eye drops if necessary. It may resolve itself, it may not. 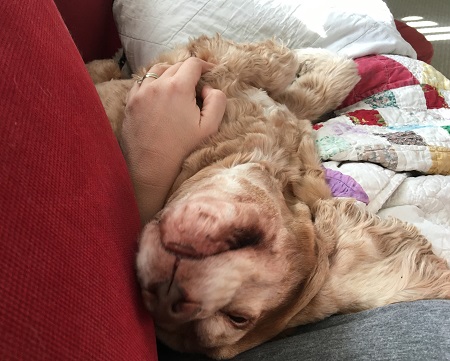 But Ollie is still a happy, drooly dog. He’s my favorite shmoop and he doesn’t know it yet, but this summer he’s getting a little brother (DOG) to romp with and be his new best friend.