I mentioned before the steps that I am taking to become more involved. Two of those actions were phone calls and writing postcards. Here’s where I’m at…

I’m still using the Action Checklist for Americans of Conscience to guide my actions. I can’t recommend this list enough. Not only does it have action items without the usual screaming sky-is-falling hype you see on Twitter, it contains a multitude of links to the stories behind the issues, which I appreciate. It comes out on Sundays. I love it so much I toss her money on Patreon monthly. 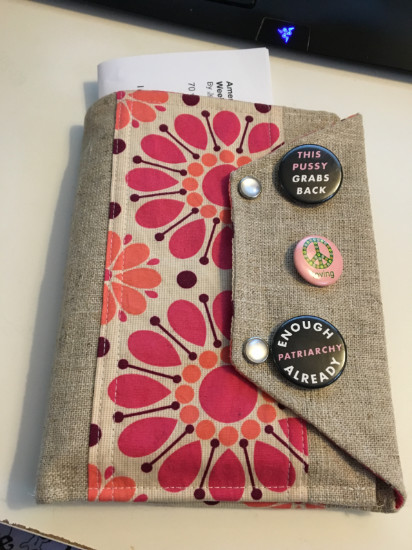 I received this cloth portolio and the peace pin from the lovely Kristen when I was her bridesmaid. The pins are from Seattle.

Mondays I usually work from home, so that’s when I make my phone calls so I don’t bother my cubicle neighbors. I HAAAAATE phone calls. Once I aged out of the on-the-phone-for-five-hours days of my youth, I moved immediately into being fine never speaking on the phone again. Unfortunately, I live in a world where voice matters, so phone calls it is. If I’m contacting my reps about more than one issue a week, I make a phone call and use Resistbot. 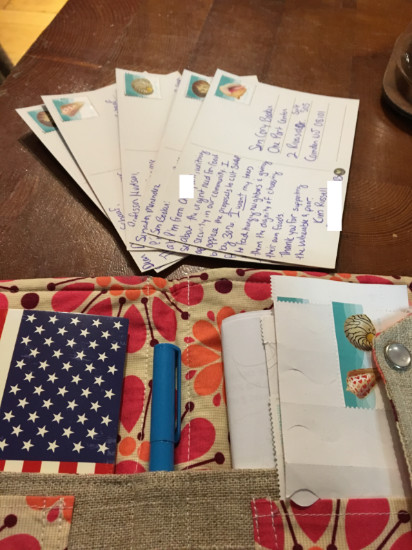 On Fridays we drink fancy coffee and write postcards!

I was writing postcards wherever and whenever, which resulted in postcards scattered around the house, misplaced stamps, and cards not getting mailed. For the last FOUR YEARS holy crap time is whizzing by I go to a fancy coffee place on Friday mornings for breakfast before work. Turns out, it’s the perfect place to crank out the postcards! It’s not hard to get through at least 6 of them in a sitting. Plus, my office building has mail drop in the lobby so that’s less to carry home.

I received this cloth portfolio as a bridesmaid gift from Kristen WAYYYY back in 2011. It fits everything I need — postcards, pen, action list, and postcard stamps. The pins from Seattle give it a bit of an edge. Now I can toss my supplies in my bag without worrying about stamps peeling loose and self-adhering to my wallet. (It happened.) 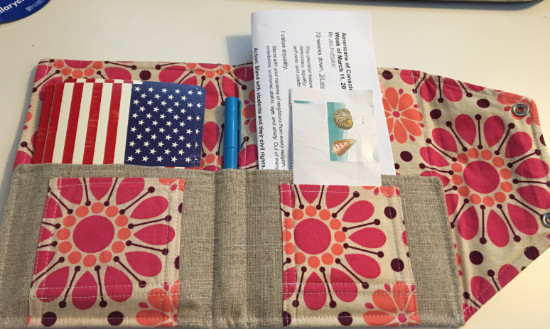 I still need to hit up a city council meeting because someday I feel like I’ll need/want to speak at one, and I want to know what they’re like before that happens.

What I’m listening to: Tapestry

Sunday Five: The Shine of a Thousand Spotlights