Happy Friday! This was my last day of work before a week off, so I’m suitably chill. 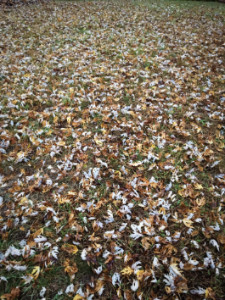 We are the only house on our street whose tree dropped all its leaves. Because of course.

I’m a bit tired tonight so I’m going to hop right to this week’s Friday 5. The theme is Dear Old Golden Rule Days which is from the old song called School Days that we used to play on the Victrola when I was a child.

Probably at the Pennsylvania Conference for Women last week, as part of a “how many of you” question. I don’t raise my hand in meetings anymore. We’re all adults — we know how to speak up when others have paused.

(curious about the lack of capital letters in the questions) We’ve been working on a project at work since last August. It launches in December and I’m starting to fly into panic mode. The reporting portion of it is web-based so sometimes at night I’ll log in and stare at it and lose all confidence in myself.

It’s SAP Business Intelligence “Webi” dashboard, by the way. If you have some great tutorial that helped you with it, care to share? I need a few “eureka” moments to get my mojo back.

Today we had a scavenger hunt at work. We divided into 4 teams and had to take photos of or bring back a bevy of items from places around the city. I’m cheating on this question because I had a conference call during that time. I’d have been more upset about if I wasn’t going to be out next week.

Awful, but it always has been, even in the school days. Penmanship was always my lowest mark, and it was a relief when I got to middle school and it no longer mattered. I’m tickled pink that the only person who has to read my notes now is me.

Every now and again I’ll heat up some Ellio’s Pizza. It reminds me of grade school cafeteria pizza, which used to be rectangular slices individually packed in foil boxes. We were also given “hot satellite” sandwiches which was some sort of ham and melted (American? Government?) cheese on a bun. They were so good but I’ve never been able to make my own. In high school I basically had a hot dog and french fries every day for 2 1/2 years – that’s easy to replicate.

Where have I been? What do I want?