Happy Saturday! I had this lined up to do last night, but a few weeks ago I saw 3 NYT Crossword puzzle books that weren’t even touched so I’m forcing myself to do a page a day so I can get them off of my shelves. I’m considering it necessary mental exercise. Too bad I can’t close a fitness ring on my Apple watch by doing that. 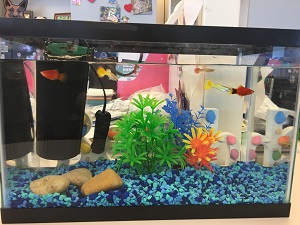 We set up a new fish tank at work. Fingers crossed they make it through the weekend.

Tonight I’m meeting up with some family to eat and catch up, 2 of my favorite things. 🙂

Time for the Friday 5! This week’s theme is The Road to H. E. Double Hockeysticks which is a four-letter word meaning underworld. Let’s get to it!

1. What are some titles in your to-read stack?

There are 222 books in my Goodreads to-read list. The one that’s been there the longest has been there for almost 10 years. It’s called “The Dead Beat: Lost Souls, Lucky Stiffs, and the Perverse Pleasures of Obituaries” by Marilyn Johnson. I added it back when I worked at the C-P and obits were a big part of life. For more bookish talk, see Tuesday’s Show Us Your Books post. I love those linkups even though it takes me a week to get to everyone who shared.

2. What are the highlights of this weekend’s to-do list?
I’m taking a trip soon and I’m going to attempt to go with only a carryon suitcase and a backpack. I’m already panicking so on my list for this weekend is to to a trial packing run. I’ll also try to do a capsule wardrobe, which I always fail miserably at because by day 3 I’m “OMG I’m so tired of gray, black, and blue!”

3. Which current or upcoming movies are you looking forward to?
Not a movie person.

4. What’s something you meant to do this past week that will have to wait until next week?
I have to make a well-person physical appointment with my primary care physician, but they close early on Fridays so I’ll call on Monday. I put this off every year but my rescue inhaler is woefully expired.

And since I kind of overshare here, I got my period on Thursday night, only 2 weeks after the previous cycle. I know this is likely a symptom of starting menopause but yesterday morning I called my GYN, connected to the nurse line, and left a message like a good rule-following Do-bee. The outgoing message said the calls would be returned in the order of importance. Which, I get.

But you know, it’s been over 24 hours and I haven’t received a call back. And even though I know it’s a common symptom of menopause and I’m 45 and this is kind of low on the importance scale but maybe someone could have called back by now?

Because I don’t have a history of calling them for emergencies. And unexpected uterine bleeding is likely a symptom of menopause, but sometimes it’s a symptom of OTHER THINGS. Should have said that I was pregnant to get a same-day call back?

Because between this, and my ER visit for food poisoning last year where despite repeating that I was in gastrointestinal distress and having elevated white blood cell counts, I was given a vaginal ultrasound and ultimately diagnosed as having fibroids (which I already knew, but they cause me no pain) and discharged with no medicine other than a “oh, hun, if you still have a stomachache just have some Milk of Mag!” …

This is why women walk around with 20-lb uterine tumors when told they’re only having a stomachache, and why women with GI problems are told it’s just period cramps and THIS IS WHY WOMEN DIE because we are told to contact our doctors when something happens outside the range of our “normal,” and then our symptoms are ignored and/or minimized.

Like I said, I’m sure it’s just a quirk of my age, but a return call would have been lovely.

5. What’s an unfinished project (unrelated to media consumption) you haven’t touched in at least a year?
I have not made any jewelry since we moved to this house. I know eventually I’ll get back into it (I’ve been poking around Pinterest for inspiration and my earring supply is lacking) so all of my supplies remain neatly organized and ready to go.
***

I’m currently chilling in the shade in my yard, with the new DMB album playing (I like) on the Amazon Tap, acting like I don’t have a care in the world, or clothing to test-pack or a pasta salad to make before dinner…

Safe, Loved, and Warm – where do the guns fit in?