Watching: SummerSlam. Right now it’s the match for the US Title, aka the Battle of the Boos featuring My Boo AJ Styles (so hot in a “come ride in my pickup truck” way) and My Boo Kevin Owens, who is super-smart and super-funny. This is one of the two matches I am looking forward to the most this PPV. The other is Shinsuke Nakamura vs Jinder Mahal. (edited: AJ won! Yay! Nakamura lost! Boo!) 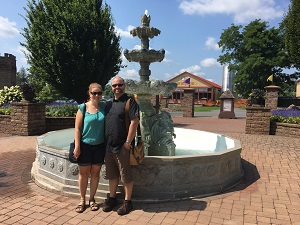 We went to the Pennsylvania Ren Faire on Saturday.

The Royal Rumble is going to be in Philadelphia in January and I have to start saving money because I want to go see NXT Takeover the night before too.

Drinking: Honey Mead from the Mount Hope Estate and Winery. I drank the entire bottle myself throughout the course of the day. Good thing I work at home tomorrow.

Playing: Diablo. I give no craps about the story line (I escape through every cut scene.) but I’ll click and kill demons until my fingers fall off. My crusader (of course) Akromah (OF COURSE) is level 58.

Taping: together a cardboard box to make an eclipse viewer. I work from home tomorrow and I plan on taking my laptop outside and working right through the darkening.

Hoping: That during the eclipse, the President is bodily assumed back to the alien planet that spawned him.

Babying: My sore shoulder/back. For the last 4-5 weeks, I’ve had this weird pain in my upper right back area when I move my shoulder. Usually I subscribe to the “solution to pain is movement” school of thought, but even with stretching and yoga it’s not getting any better. After talking with WM about it, we concluded that I might be carrying too much weight in my bag to and from work. Lately I’ve been carrying a hardcover library book to read on the train instead of my much-lighter Nook. Combine that with my hardcover planner, a lunch that contains a salad in a heavy glass jar, plus my laptop a few days a week and I think that solves the shoulder pain mystery. For the next few weeks, I’m going to carry a lighter crossbody bag with less in it. I really don’t want to have to go to the doctor.

Reading: How Italian Food Conquered the World. Hardcover book from the library. The next book is an ebook. My shoulder will be pleased.

Mourning: My sourdough plans, which died when my leaven wouldn’t float. I’m going to try the starter again tomorrow.

Speaking of eclipses, have we as a world finally gotten over Nostradamus? Usually with something as cosmic as an eclipse people would be trying to tie in predictions and stuff. WM said that maybe the lack of a 2012 Apocalypse soured people on prophecies. Or maybe real life in 2017 is weirder than Nostradamus ever could have predicted.

Total Eclipse of the Heart