Halloween: How to be Baby Spice when you're over 40

This year TNP decided that instead of an individual costume contest on Halloween, there would be departmental ones. The stakes, my friends, were upped. I was desperate for a first place win after last year’s practically less-than-perfect second place, so I knew I’d be all in.

We took a survey of how many in our department wanted to participate. Two coworkers had the day off already, and a third opted out. That left us with five. Four women and our male manager. Since costumes are all gender-bendy anymore, we settled on the Spice Girls.

And I got to be Baby Spice. To be honest, I was not thrilled at first because I’m twice as old as Baby Spice was when Wannabe came out, and about twice as round too. But I am a Dowd and I am competitive. Therefore, nose went to grindstone.

After scouring Goodwill and looking at Halloween shops online, I found the dress at Ross for $7.99. It was an XL, but still very clingy. I was Spanxed from underboob to thigh, and that worked wonders.

I made the Baby necklace out of Shrink paper. I printed out the word “BABY” and traced it onto the paper. Next, I used a silver Sharpie to color it in. I punched out two holes, cut out the rest and into the oven it went.

WM: What are you doing?
Me: (peering into oven) Making a necklace for the Baby Spice costume. I’m worried because it’s curling. Do you think it’ll flatten?
WM: Do you guys do ANY work there?
Me: Shhhh!

I have no shortage of jewelry supplies here, so it took a minute to attach it to cheap chain and make the necklace.

I’m proudest of the boots. First, I covered sheets of construction paper with white “Duck Tape” to make a white, shiny, vinyl-like look. Then I used more tape to wrap pieces of the paper around my regular black wedges. The rest of the paper became boot toppers, and I used pink “Duck Tape” to trim them. They turned out great, albeit VERY WARM. I removed them by using scissors to cut down the length until I reached my shoes. The only lasting damage is a lot of adhesive on the bottom of my shoes. Some goo-gone will take care of that. There was no way my current “Ginger Spice” hair would make it into “Baby” shape on its own. If we weren’t heading into the holidays, I have just dyed it white blonde. But I have enough disaster hair photographs on record. Instead, I bought a wig from Costume Discounters on a Friday and it arrived on Monday. I also printed out some British flags for props.

Makeup was done by my lovely co-worker A, who brought in a giant bag full of her own makeup. The costume is pretty “Barbie” on its own, but with the other four members, it was magic. 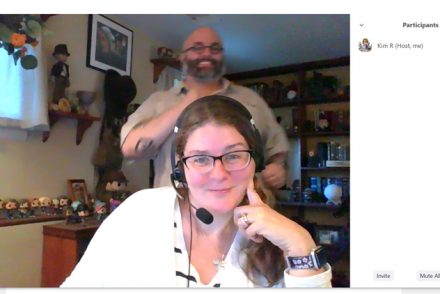 Back to the (Home) Office 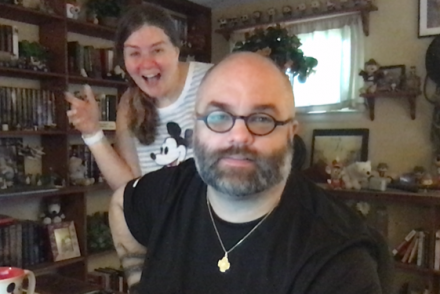