Heartburn by Nora Ephron
My rating: 4 of 5 stars

Successful cookbook author Rachel Samstat just found out that her husband was cheating on her. She also happens to be seven months pregnant with their second child. This book, though classified as fiction, is based on the demise of Nora Ephron’s marriage to Carl Bernstein. Despite the somber subject matter, reading this book is like sitting with your funniest girlfriend as she tells her tale of woe. And every now and then, Rachel gets so worked up by it all that she has to default to a subject that she knows in and out — she blurts out a recipe from her cookbook. I checked this out from the library, and regret I didn’t get to copy down any of these pre-healthy eating recipes.

A little warning: This book was published in the early 1980s, so you’re not going to get a power-washed politically correct story. There are ethnic jokes and there’s also a very long period of time when we don’t hear about where Rachel’s toddler is. This sticks out in this day and age when we get a diaper-by-diaper telling about motherhood even in books where motherhood isn’t the main subject! Of course, the kid is with a sitter or nanny, but back in 1983, nobody cared where your kids were.

It’s funny (in a ribald way), poignant, and a quick read. Here are some of the quotes that grabbed me:

…and the next thing you know you think you’re in love with both of them simply because you’ve been raised to believe that the only polite response to the words “I love you” is “I love you too,”…

…The nurse gave me one of those withering looks that are meant to make you feel as if your thoroughly understandable rage is mere female hysteria.

Vera said: “Why do you feel you have to turn everything into a story?” 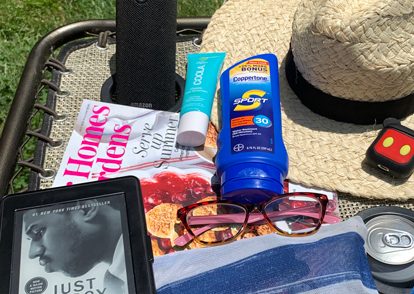 Show Us Your Books SPRING/SUMMER 2020