We survived the Heart Walk!

I figured I may as well write this tonight, since I was going to write it tonight and post it tomorrow anyway. 🙂

Firstly an apology to those who tried to donate and realized that there was a $25.00 minimum! My face is red..I had no idea you couldn’t pick a smaller amount. Sorry. 🙁

Kind thanks to Janet and Carl for their donations on Friday — we sent them in the mail to the AHA. They weren’t taking money today at the event itself. We collected over $200 for the walk…we’re extremely grateful!

So let’s talk about the walk…

I woke at 8:30ish, feeling like crap. I have a cold now. David’s had a cold. Basically, I’ve been sick since before I went to California. But I digress.

The Our Lady of Lourdes Pharmacy Team was meeting at 10:30. So naturally, we left at 9:30 for the 15 minute drive to Cooper River Park. Got there early, naturally.

Boy howdy it was cold!!! I had a long sleeved blue t-shirt beneath the grotesque red Lourdes one, and was still chilled. Luckly the red shirt was an XL and I could easily pull the sleeves over my hands.

Parked the Ion, headed toward the music and tents. Team Pharmacy wasn’t there yet, so we meandered about and saw the sights. A band was playing on stage. Each of the ‘big sponsors’ had a tent where they gave out brochures and free stuff, and hawked their wares. The busiest tent was the refreshment tent. To our dismay, they weren’t serving donuts, soda, or scrapple. We had to make do with fruit and bagels — silly heart-healthy people.

There was an ambulance on standby. Guess they heard we were coming.

We found the Lourdes group in time to hop into the group photo. Very back row. I probably wasn’t seen, since I was crouching behind the standing group…(smirk)

Finally, we caught up with Team Pharmacy. There were eight of us. We milled about and waited for the walk to begin.

The cheerleading squad from Paul VI High School got on stage and did an unintelligble cheer. Okaaaaaayyyyy…

Finally, a guy from Lourdes hops on stage and has us go through some deep stretching exercises to get ready. Boy, are we ready!

Then he introduces three women from Virtua’s Roher Center for HealthFitness. They strip down to tight pants and tie their sleeveless shirts up so we could see their abs. Then they perform a dance. I’m not kidding. All that was missing were poles. Um…when can we walk?

Next was a doctor thanking us for coming. You’re welcome. When can we walk?

Then someone presented somebody else with a big check. Great! Walk now?

Another woman appears on stage and invite up those who have survived struggles with heart disease. They’re all wearing red ‘survivor’ baseball caps. OK. That’s cool. Warm and fuzzy now. Can we walk?

They shoo the survivors off of the stage (slowly). Dancers come up again. Apparently, they’re aerobics teacher at the Center for HealthFitness. They lead us through a TWENTY MINUTE aerobic routine! DARNIT!! I’m HERE to WALK!!! Finally, it is time to walk! They warn us that there is going to be a starter pistol used. It made the wussiest little ‘pop’ you’d ever want to hear. We’re off!

It was so nice to see the wide variety of people walking. All ages, colors, body types. Babies in strollers. Older folk walking slowly w/canes. Dogs and pups on leashes. (Maybe next year, Max…)

A few cars beep their horns in support as they drove by. Wait! It’s the Paul VI cheerleaders! They’re leaving?!? Come on back, wimps!!!

I had never walked around Cooper River Park before. It’s quite scenic. At one point you can see the Philly skyline poking up past the trees. We kept up a very nice pace, and spent most of the time talking with Megan, who is a Pharmacy Tech at Lourdes. The sun and activity warmed us up. There were event staffers giving out free bottles of water (c/o Subway) the whole way around the track. Made me feel like a real athlete!

As we made the last turn, I was a bit concerned. Nobody really told us how long the track was, and from the numbers of t-shirted people get into their cars and leave we realized that nobody was doing a second lap. By the time we reached the start/finish line, we were quite fatigued, so we decided to call it a morning. I was hoping we walked at least a mile.

So what did our Heart Walkers do to celebrate our achievement? David, Megan, and I went to Wendy’s. Burgers, fries, cokes. Mmmmmm……..not very heart-healthy but very delicious! 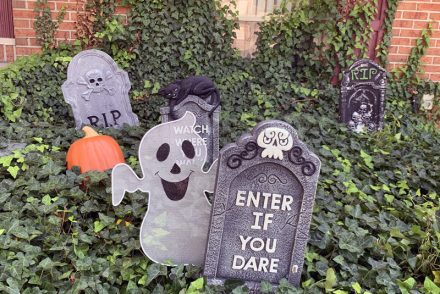